SUEZ, alongside its partners Cornwall Council and the Merseyside Recycling and Waste Authority (MRWA), has this week celebrated the official opening of both the Cornwall energy recovery centre and the Wilton energy-from-waste facility.
SUEZ hosted events at the Wilton facility in Redcar on Thursday 14 June 2018 and at the Cornwall energy recovery centre on Friday 15 June 2018, celebrating the efforts of the many hundreds of people involved in bringing these complex facilities to fruition. In the past two years, SUEZ has developed and successfully commissioned three new energy-from-waste facilities – Wilton, Cornwall and Severnside (for West London), the latter of which was officially launched earlier in 2018.

SUEZ recycling and recovery UK works in partnership with Merseyside Recycling and Waste Authority and other local organisations to manage the household waste that’s generated daily across Merseyside and Halton. Waste – which otherwise would have gone to landfill – is brought to the state-of-the-art facility on the Wilton International Industrial Estate where it is treated to generate enough electricity to power 63,000 homes.

Steam generated is also exported to local industries on the Wilton International Industrial Estate. Residual waste from around Merseyside and Halton arrives at the Knowsley rail transfer loading station on Merseyside – operated by SUEZ recycling and recovery UK – where it is sent by rail container to Wilton energy-from-waste facility on Teesside. Transporting residual waste by rail saves the equivalent of 1,000 HGV journeys and offsets around 127,000 tonnes of CO2 each year.

The official opening was marked by a tree planting and plaque presentation.

MRWA Deputy Chairperson, Cllr Tony Concepcion, said: “It’s been a long process for the Authority to ensure that this facility and the contract for Merseyside and Halton’s waste are both value for money and the most sustainable option for our taxpayers for many years to come. We’d like to thank Merseyside Energy Recovery Limited, SUEZ and all of the many other partners, contractors and sub-contractors who have contributed to getting us to this point today.”

In Cornwall on Friday 15 June 2018, representatives from Cornwall Council and SUEZ were joined by members of the community for the official opening of the Cornwall energy recovery centre.

The opening event showcased some of the projects that were awarded grants by the St Dennis and Nanpean Community Trust. Established to serve the communities around the energy recovery centre the trust receives a percentage of the revenue from the energy generated by the facility together with funding from Cornwall Council. To date over £370,000 have been awarded to local community projects.

To mark the occasion, the winners of a competition for school children around Cornwall, to design and make an insect or bird house from reused or recycled materials, were presented with their prizes.

At the event SUEZ and Cornwall Council also announced the publication of ‘Managing Cornwall’s household waste’, its first annual report on how the organisations are working together towards the priorities laid out in Cornwall’s Environmental Growth Strategy. The report looks at initiatives from the past year that are helping Cornwall to reuse and recycle more of its waste and preserve its natural environment. Reflecting on the successes of this first year of full service operations, the report outlines the commitment from SUEZ and Cornwall Council to continue working towards a cleaner, greener Cornwall for everyone.

Sue James, Cornwall Council Portfolio Holder for Environment and Public Protection said: “Thank you to Cornwall Energy Recovery Limited, SUEZ and the other partners, contractors and sub-contractors who have worked together to deliver the facility, which has now had a successful first year of operations. We can celebrate that most of our residents’ household waste left over after all efforts have been taken to reduce, reuse and recycle is now used effectively – as a fuel to safely and sustainably generate a huge amount of electricity which is exported to the National Grid.”

David Palmer-Jones, Chief Executive Officer for SUEZ recycling and recovery UK said: “We are delighted to this week celebrate the official opening, and first year of successful operations, of the Wilton and Cornwall facilities. Complex infrastructure projects like these require the skills and dedication of many people to make them a reality, but equally the vision of politicians who are entrusted by their constituents to provide long term stable solutions for the waste generated.” 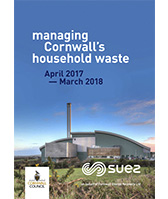