Achieving a world-leading producer responsibility system to tackle waste in the UK will be dependent on 10 fundamental principles, according to a new document published today by SUEZ.

Over the past three months, SUEZ has conducted more than 25 workshops with various groups and organisations, seeking feedback on a range of policy interventions proposed by SUEZ in its manifesto for the future of resources and waste in England, which was published in late May 2018.

Workshop attendees included representatives from the devolved administrations of Scotland and Wales, UK government, Coca-Cola, Marks & Spencer, Iceland and INCPEN among many other brands, packaging manufacturers, consultants, local authorities, businesses and even consumers. The role of producers and major retailers was a particular focus of both SUEZ’s manifesto and the subsequent workshops.

At present, producers of packaging, batteries, vehicles and electrical items are obligated to demonstrate various recycling and recovery rates for the materials they place on the market, but SUEZ believes that these obligations should be extended to a much wider range of goods, and that producers should contribute significantly more to the cost of collection, recycling and disposal – which in turn would spark a revolution in the way we view and treat waste in the UK.

In its guidance document, SUEZ presents ten principles which it believes a well-designed extended producer responsibility system should deliver. These include: more sustainable product design; enhanced brand equity for good performers; a fair and level playing field for all producers (including internet and global sellers); better informed consumers; a competitive marketplace; innovation in materials, products and recycling systems, and simplicity for all participants. SUEZ also believes it is important that the system should be delivered at minimal cost to the consumer, seek to deter fraud and crime, and reward or penalise businesses in a meaningful way based on their performance.

The document also provides a model showing how these principles can be applied in practice throughout the economic value chain – from the point of production and sale through consumption to disposal, collection and reprocessing.

Regarding payment mechanisms, SUEZ suggests that producers should be required to pay a deposit or modulated fee covering the full costs associated with managing the materials in their products at the end of their life. This means producers with more sustainable products (for example, those that are widely recycled) would therefore pay less than those with less sustainable products which have a greater environmental impact.

SUEZ is due to release Unpackaging extended producer responsibility at this year’s RWM Exhibition, which takes place on 12 and 13 September 2018 at the NEC in Birmingham. The report will be launched with a presentation by David Palmer-Jones, CEO of SUEZ recycling and recovery UK, and the report’s author, Stuart Hayward-Higham, Technical Development Director at SUEZ recycling and recovery UK, on Wednesday 12 September 2018 at 15.45 in the Circular Economy Theatre, Hall 4.

Stuart Hayward-Higham said: “The principles we present for a world-leading producer responsibility scheme in this body of work are the culmination of hundreds of conversations between SUEZ and various actors within the economic value chain over the past couple of years. We believe they therefore provide robust and useful guidance to policymakers considering this vital topic and we would like to thank all of the people who have helped us to form these views.

"Designing an extended producer responsibility scheme which is efficient in both cost and delivery, and which therefore minimises passed-on costs to consumers, is essential. We also believe that consumers should be given simple, on-product, information so they can make informed choices about the sustainability of the things they purchase.

"Furthermore, we believe that the design of extended producer responsibility systems should ensure they can expand and be scaled as necessary, so we do not end up with multiple repeated schemes.

"Finally, ensuring that robust evidence can be easily gathered, and used to prevent fraud, is vital for the success of an extended producer responsibility regime – which should also make successes and failures transparent and allow society to reward the best performers.” 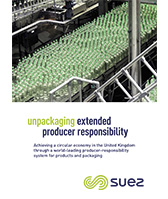