“Recycle by numbers” system could provide solution for “confused” consumers

Mandatory on-pack ‘eco-labelling’, featuring a new combined colour and number system, could provide a cost-effective solution to the challenge of simplifying recycling for consumers, without costing councils millions, according to SUEZ.

Despite a plethora of recycling labels and symbols, there is currently no consistent, universal, guidance to help consumers make more sustainable choices when shopping and also to help them recycle. This was an issue identified by consumers during a series of workshops held by independent researchers for SUEZ.

Consumers at the events were clear about what they wanted to fix the problem – product and packaging labels which use a three-tier “traffic light” colour system and familiar symbols to indicate how easy it is to recycle the product.

Separately, a numbering system, which would provide clear on-pack instructions for recycling and disposal, was suggested during a SUEZ-hosted workshop and is currently being discussed across industry, with a number of organisations – from manufacturers to retailers, councils and waste-management companies reportedly seeing some value in the idea – including SUEZ.

SUEZ has consolidated these ideas into a single concept, showing what a universal new recycling system for the UK might look like. The system (picture below), uses a “traffic light” coloured version of the existing Mobius Recycling Loop to inform consumers’ purchasing habits by indicating, at a glance, whether a product can be easily recycled or not – using green for the best performers and red for the poorest. 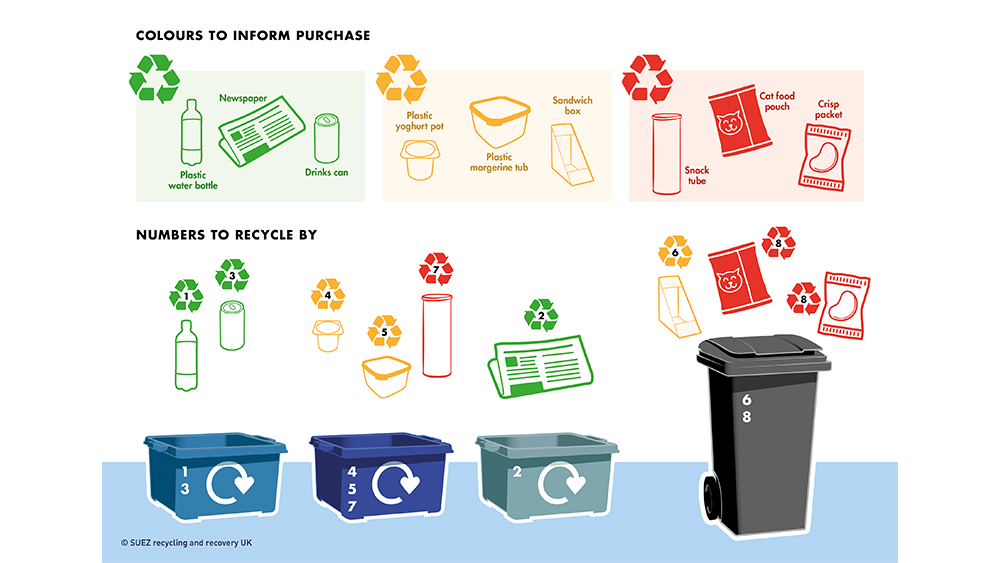 Under this system, each product category (as determined by the availability of an appropriate recycling system – like aluminium, plastic bottles, card, or glass) is also then assigned a permanent number, correlating with the same number placed on bins and recycling containers across the country. Businesses and councils would simply label their existing waste containers with the relevant numbers, depending on what can be recycled locally, rather than trying to “harmonise” hundreds of different systems by introducing new containers and infrastructure – a proposition many local authorities oppose.

During the consumer research, participants thought a negative or “red” eco-label would erode a brand’s reputation over time, encouraging them to swap brands, and suggested that “a shopping basket full of red-label goods would be embarrassing at the check-out”. They also said that they find existing recycling labelling confusing and claimed it doesn’t help their disposal/recycling behaviour.

This new colour and number system could replace the existing on-pack labels – giving not only advice to inform purchasing, based on recyclability, but also clearly identifying which bin (by number) the item should be placed in.

During the research, participants were asked about their own consumption habits and the majority said they never or rarely consider the environmental impact of the products they buy at the point of purchase. This was echoed in a subsequent national survey of 2,000 people for SUEZ, which found that sustainability and waste disposal were the two least important factors for consumers (among those tested) when buying goods.

According to the national survey results, over half (57%) of the population claim they would routinely check environmental labels if introduced, and that this would influence their purchasing decisions, while over two-thirds (67%) feel that they would be more likely to purchase brands that were more sustainable than competitors. Although, 60% of people said they would only switch brands if the more sustainable alternative was also cheaper.

CEO of SUEZ recycling and recovery UK, David Palmer-Jones, said: “For years now, manufacturers, retailers, local councils and waste managers have heard from consumers that the public finds the nation’s ‘binfrastructure’ confusing – a view supported by our recent research.

“There have been numerous calls for ‘harmonisation’ to help us all recycle, but also understandable resistance to this, largely due to the cost, complexity and impracticalities involved in changing systems.

“This purchase by colour and recycle by numbers system, in part designed by the very consumers that will use it, solves the twin challenge of empowering consumers to make more sustainable choices and harmonising bin collection systems, making it simpler to recycle without having to spend a fortune on new ‘binfrastructure’.

“Under this system, it would no longer matter what colour or shape your bins are, and we will all continue to use what we have – but with clear instructions on the packet to make recycling simple and help us make informed shopping choices.

“Mandatory on-pack labelling must be just part of a radical shake-up by Government to influence the way we make, consume and discard materials sustainably as a society. In the Chancellor’s budget this month we hope to see measures to combat throw-away items while incentivising the use of recycled material – driving a domestic circular economy. The resources and waste strategy for England, due in November, must also contain measures to assign greater financial responsibility to manufacturers, for recycling and disposal costs associated with the materials they place on the market, if we are to address the issue of waste being designed-in at source.”